Showing posts from August, 2013
Show all 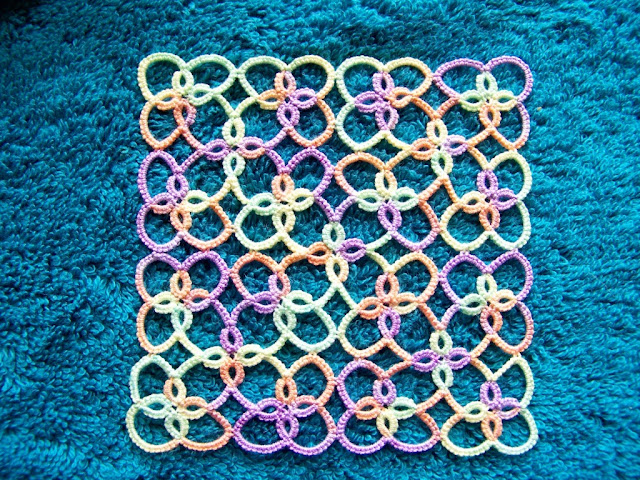 I have tried this pattern a couple of times and it has beaten me...Mainly due to pattern attention deficit issues... Someone on InTatters was searching for the pattern and it reminded me that it was on my 'Nemesis List' and, being in THAT frame of mind (you know - the "oh no you don't....not going to sit there and laugh at me and say you can't be done"..frame of mind) I decided to give it another try. This time I used some of my precious Rainbow Lite hand dyed thread from TatsKool so I couldn't woos out on it without wasting this precious thread (and the $$ associated in getting it in the first place)... So here it is... TA DA!!! You have to watch where you are in the pattern pretty carefully but a photocopy of the pattern and a highlighter solved that problem.
8 comments
Read more

- August 16, 2013
Someone asked me the other day about my tatting history.....so read at your own risk of boredom!! I learned to tat at the Numurkah Community Centre in northern Victoria in 1999. Diana Eckett from Melbourne was the teacher and the class was 2 half days. The cost was $40 plus threads. I saw it on the notice board and, having wanted to learn lacemaking for years, I enrolled...... Now what noone told me was that tatting and bobbin lace are NOT the same thing!!! Diana handed out these funny looking plastic thingys and some thread and I thought… Ahhh…......Earth to stupid?…........I don't think this class is what you think it is……. (But I HAD paid and it all looked very interesting …...so I stayed and played. Thank goodness!!) On the first day we learned to flip the stitch using two colors of wool and using finger tatting as though for a chain so we could see the color change when the flip occurred. We then progressed to the ring once we could flip the stitch consistently. After getting
16 comments
Read more

- August 09, 2013
Today I found the most beautiful thread I bought from Brenda (Bre-Aly Threads on Etsy) a couple of years ago....problem is I cannot remember what I bought it for LOL. It must have been something special because it is size 10 and I never tat with 10.... Any suggestions? Have three 175 yard balls and it is a gorgeous soft blue/purple combination. Pic coming soon!
6 comments
Read more
More posts