Finally the last of the silver shuttles is here!!

Cleaned up nicely too. 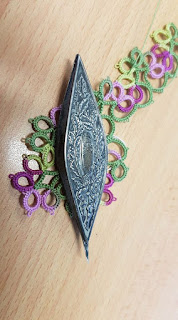 So now all my precious ones are together at last.
Still on the lookout for more Websters and that all elusive enamel. I will find it one day..... 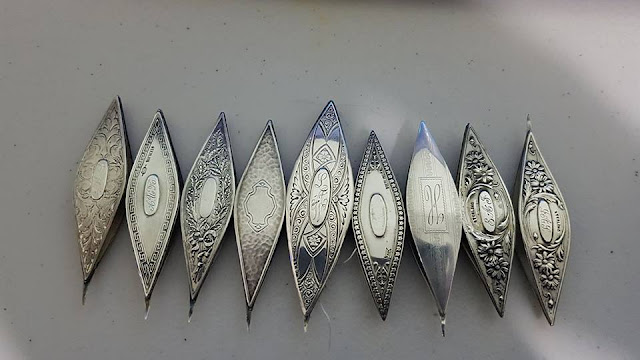 The four on the left are Webster -
Founded by George K. Webster as G.K. Webster & Co. in 1878. Became the Webster Co. c. 1894. Makers of miscellaneous sterling flatware items, holloware, vanity items and novelties along with a small line of silverplate items. Became a subsidiary of Reed & Barton in 1950, operating as an independent company. Purchased the Frank W. Smith Silver Co. in 1958.

The large one is a Nussbaum & Hunold -


Then a Codding Bros & Heilborn  -
Founded by Arthur, Edwin and James Codding. Leo A. Heilborn joined the company in 1891. Incorporated c. 1897 as the Codding & Heilborn Co. Makers of sterling souvenir spoons and novelties.

and the final 2 daisy ones are marked Sterling but have no visible hallmark. Any info on them would be appreciated.

I have decided that Middy Clark is dangerous to my bank balance.....

She keeps coming up with fantastic little shuttles I really love to use!!

I adore her Dragon Dog and Phoenix metal shuttles because the feel so nice and balanced to work with and fit my hand nicely.

THEN... she comes out with these divine little garden shuttles! AND not just one...6 different colors. My addiction will never be overcome!


Middy's shop in Etsy is called TheKnottedVine. Worth keeping an eye on what she puts up for sale. These ones are not always available.
https://www.etsy.com/shop/TheKnottedVine?section_id=17757593 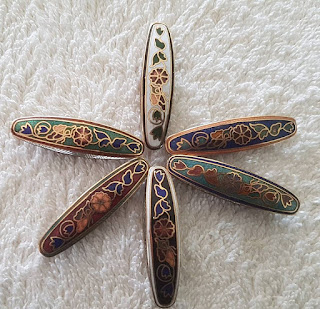 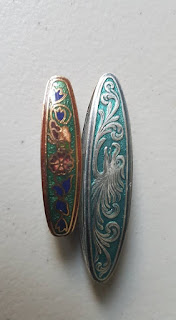 Just a note here too. The shuttles I show on my page and in Tatting Shuttle Addicts on facebook are all purchases. The are not freebies or giveaways.
My opinions are that of a customer and nothing more.
https://www.facebook.com/groups/tattingshuttleaddicts/

Liyarra
Mooroopna, Victoria, Australia
What is a Liyarra you ask?? Well.. she is now a part-time totally addicted, obsessed tatter. Part-time because new "old" pursuits have popped up their heads and demanded my attention over the last 18 months or so ...INCLUDING...photography and flying!! Yep - my partner Ben is a photographer, news cameraman and an obsessed pilot so of course he needs a willing "soundie" and co-pilot!! Hmm....Gee wonder where he can find one of those???? He also actively encourages my return to tatting and that makes him perfect! Tatting still holds a great place in my heart. I still believe you can never learn enough, read enough or tat enough in this lifetime.

Where you can learn some really cool stuff....

check out my library on LibraryThing