Motif 16 - the hunt for the lost motif

A while ago I did a very nice little blue motif. Before the challenge so it did not count. But it was nice so I  tatted it and moved on to the next thing on the ever-increasing list... 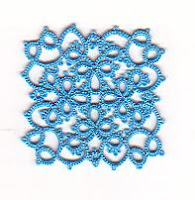 A few months later - I was looking for motifs to tat for the challenge when I came across this curious little blue motif and thought I might like to do it again. So I went to my trusty tatting diary to find out where it came from and SHOCK ....HORROR.....I had NOT even entered it!
This was so very very not me with my obsession of recording everything I tat. So I started trying to find the pattern. No luck. So I went to InTatters and humbly asked for help. How embarrassing LOL The Pattern Hunter that can usually find even the more obscure patterns for people, couldn't find a simple motif that she tatted less than a year ago!!!! HA HA HA.
BUT....Neither could anyone else at the time!!!! So it remained an elusive "lost" motif. There was this tiny nagging thought that it was : a) one that was part of a larger pattern and b) one that I had done during a tatting session with Dantatter. (turns out : yes and yes!)
No luck with that line of inquiry either......hmmmm.....
UNTIL....... 3 months later and hours of frustrated book looking. (Well that has upsides though...patterns....lovely patterns.....precious patterns.......And yes I guess at times some of those hours were not actually LOOKING for THAT pattern in particular..........)

I gave up on looking and decided to tat something out of Jan Stawasz's Tatting Theory and Patterns. Maybe something square? Ah there is a lovely looking one on page 75-77 - Doily Set! Hmm ...nice....I'll do .....WHAT???????????
There it was - staring me in the face, laughing, pointing and shouting IDIOT and running away. The darn motif!!
So I set myself a punishment - in a way only tatters could think of - I decided that I HAD to tat that whole mat so I would never forget again. (cool punishment hey??)
So here it is and seeing it is made from the "lost" motif I am putting it in here as Motif 16.
Lovely to tat BTW if you are thinking of trying it! 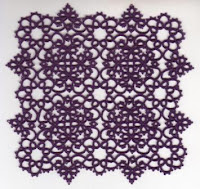 Thread was a disappointment - it is Lizbeth dark purple in size 20. It was crap to tat with. So unlike all the other Lizbeth I have tried. Had multiple knots and slubs in it. Very annoying. But the end product turned out ok
Posted by Liyarra at 5:45 PM 11 comments:

Liyarra
Mooroopna, Victoria, Australia
What is a Liyarra you ask?? Well.. she is now a part-time totally addicted, obsessed tatter. Part-time because new "old" pursuits have popped up their heads and demanded my attention over the last 18 months or so ...INCLUDING...photography and flying!! Yep - my partner Ben is a photographer, news cameraman and an obsessed pilot so of course he needs a willing "soundie" and co-pilot!! Hmm....Gee wonder where he can find one of those???? He also actively encourages my return to tatting and that makes him perfect! Tatting still holds a great place in my heart. I still believe you can never learn enough, read enough or tat enough in this lifetime.

Where you can learn some really cool stuff....

check out my library on LibraryThing